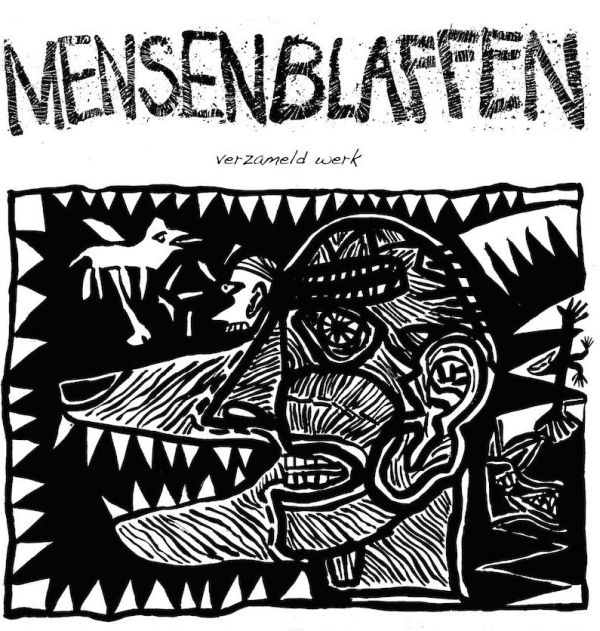 Mensen Blaffen was a six piece band from Aalst in Belgium. They excelled in playing post- modernist funk & weird rock. When asked how they would describe their work the members said "hardcore-chanson, mixed with ugliness, sweetness and dirty worms in a rotten horse together." The main characteristic of Mensen Blaffen is the fact that their music is hard to describe. They where often compared in music style to A Certain Ratio. After a few years of rehearsing the band participated in 1984 in Belgians Rock Rally. They reached the finals and shortly after they released their debut, the mini-lp "Mensen Blaffen". Their music showed a certain playfulness and naivety, Dutch lyrics full of sound associations and exclamation marks, the cooing and unctuous voice of Sylvie Honnay and the funky sax and percussion, comparable to the style of Defunkt or Lavvi Ebbel. Some tracks were played several times by John Peel in his trendsetting radio show, showing a lot of appreciation for the band. The debut mini-lp was produced by Jo Bogaert (the man behind the international hit "Pump Up The Jam" by Technotronic.) In the same year they did a few supports (Virgin Prunes, Blurt, Anne Clark), changed their record company and went looking for a new producer. Fred A aka Gerry Vergult (of Aroma Di Amore) seemed to be the right man for the job. Early 1986 they released their second mini-lp "Dun Seul Coup". Eye catchers were the swinging "Hippopotame" and the sultry track "Kleine Vamp". It was a homogeneous whole in which the surrealistic lyrics in French and Dutch of Sylvie Honnay got enough space.The famous Dutch music magazine OOR gave the release an enthusiastic review. The follow-up was the maxi-single "Krengen" somewhat more rough and more danceable songs, subtle aiming at the charts. A lot of gigs in Belgium and Holland followed. They also played in Germany and France and did a radioshow in Lille (Frquence Nord). But it was time for a change. After intensive rehearsals they released their full album "Raven" in 1988. A tremendous album full of energizing guitar songs with a dark edge in a production of Theo Van Eenbergen (Nasmak,Henry Rollins Band). Sadly enough their final statement didnt receive the attention it deserved. Mensen Blaffen were: Jan Van den Brande (Bass/Guitar), Mario Segers (Bass/Synthe- sizer/Percussion), Sylvie Honnay (Vocals), Pascal Baeyens (Guitar, 1st album), Steven Lorie (Drums), Ludo Vervliet (Bass), Eddy Valk (Saxophone)