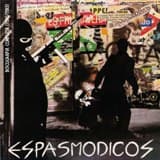 First time release with all the songs recorded from this seminal Spanish band. Replica for cover and inside art-work. 180 grs. Vinyl. Influenced by the first punk-hc bands coming out but also for some hard-rock elements, soon the first tracks were composed and then, in 1982, the mighty DRO label released their first 7" called "Recomendado para molestar a su vecino", featuring 3 songs that were one of the seminals steps into punk in Spain.