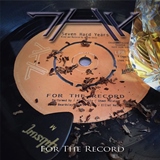 Initially formed as a solo project by which to document his own songwriting adventures, Alan Kelly (formerly of UK major-label rockers Shy) has cultivated a strong, skillful stable of bandmates and collaborators in the continuing saga of 7HY (officially named Seven Hard Years). As an album, 'For The Record' carries the 7HY banner forward. While still centering around melodic chorus hooks and strong hard rock energy, the record finds 7HY expanding its horizons in terms of layers and production. Songs like "Never Say Goodbye", "That Song", and "Uprising" showcase what 7HY is best known for; hard-hitting rock with strong melodic currents. Then there are songs like the, dare we say, epic "What Is The World" with its broadly-scoped atmosphere and "Burning Rain"; a subtle, intensely mood-driven rocker. Suffice to say, the band has simply outdone itself. With 'For The Record', Seven Hard Years has now firmly established itself as a legitimate force in the melodic hard rock universe.

Shape Of The New Sun

Made In New York