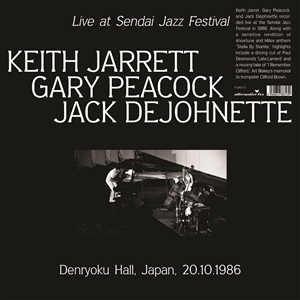 Keith Jarrett: Live at Sendai Jazz Festival, Den-Ryoku Hall, Japan, 20.10.1986 The gifted American pianist Keith Jarrett is one of the jazz worlds greatest musicians. Born in suburban Allentown, Pennsylvania in 1948 with a mixed European cultural heritage, Jarrett was a child prodigy that played piano at the age of two, appeared on television, aged five, and gave his first classical recital, aged seven. After studying at the prestigious Berklee College of Music, he moved to New York in 1964 to perform at the Village Vanguard and then joined Art Blakeys Jazz Messengers. Drummer Jack DeJohnette subsequently brought him into the Charles Lloyd Quartet, resulting in European tours, and when that group disbanded in 1968, Jarrett began fronting his own trio with bassist Charlie Hayden and drummer Paul Motian, and also began longstanding collaboration with Miles Davis, helping to shape noteworthy releases such as Live/Evil. From 1983, Jarretts trio featured DeJohnette and former Albert Ayler collaborator Gary Peacock on bass, that version of the trio being the musicians featured on this beautiful concert staged at the Sendai Jazz Festival in 1986. Along with a sensitive rendition of showtune and Miles anthem "Stella By Starlite," highlights include a driving cut of Paul Desmonds "Late Lament" and a moving take of "I Remember Clifford," Art Blakeys memorial to trumpeter Clifford Brown.

1. STELLA BY STARLIGHT
2. LATE LAMENT
3. THE MEANING OF THE BLUES
4. YOU AND THE NIGHT AND THE MUSIC
5. I REMEMBER CLIFFORD