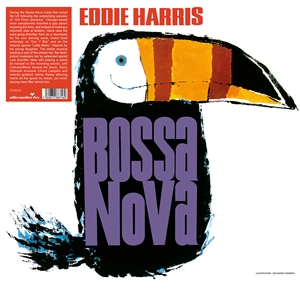 Tenor saxophonist Eddie Harris is best-known for his composition "Freedom Jazz Dance," which Miles Davis brought to prominence in 1966, and for being a pioneer of the electric saxophone, yet his career is long, distinguished and varied. Born in Chicago in 1934 to a Cuban father and a mother from New Orleans, Harris studied in his youth under the influential music teacher/violinist Walter Dyett at DuSable High School and then at Roosevelt University, where he played piano and vibraphone, as well as tenor sax, appearing with tenor sax giant Gene Ammons before graduation. Following a stint in Europe in the US Army, where he played in the 7 th Army Band, Harris worked in New York for a time and then signed to Vee Jay upon returning to Chicago in 1961; debut album, Exodus Into Jazz, was named for his jazz adaptation of the theme from the movie Exodus, a chart-topping smash which became the first jazz song to win a gold disc. There were further jazz/film soundtrack explorations for Vee Jay and some concept albums too, with Bossa Nova being the most noteworthy of the bunch. The Brazilian form had been gaining favour in the US thanks to "Girl From Ipanema," yet Harris LP was not a tokenistic stab at faddism; instead, Harris uses the form as a launchpad for his own sterling solos, heard most enticingly on "Cev Y Mar" and on the dreamy opener "Mima," inspired by his young daughter, Lolita Marie. The stellar backing is part of the picture too, the hand-picked musicians led by esteemed pianist Lalo Schriffin (then still making a name for himself), with Coltrane/Monk bassist Art Davis, Dizzy Gillespie drummer Chuck Lampkin and veteran guitarist Jimmy Raney allowing Harris all the space he needs, yet never playing mere filler behind him.