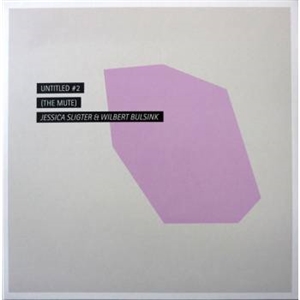 SOUNDS OF THE YOUNG AVANT-GARDE VOL. 01. Gaudeamus foundation and the independent label Unsounds are indispensable actors in the avant-garde and new music field, operating internationally from their common base in the Netherlands. With the Sounds of the Young Avant-Garde Vinyl Collection, they collaborate to present some of the most forward moving sounds in contemporary music, as they are created today by young and mid-career makers. The works are original commissions by Gaudeamus and are selected, produced and released by Unsounds. This joint venture secures a new lease of life for these works apart from and beyond the live music stages, ensuring the most thrilling music of our day and age is preserved as veritable future classics. The concept and title of Untitled #2 (The Mute) by Jessica Sligter and Wilbert Bulsink originate in a question: "When does what is muted begin to resonate?" Centering on the idea of voicelessness, The Mute explores a concept that can be investigated acoustically, but that can also be approached in social terms. How can those who have no voice in our society be heard?. The piece brings forth new ideas and connections around what the voice represents: a voice is like a home, a voice travels, a voice can be cancelled out or amplified by other sounds. It builds on a tense line bridging Bulsinks microtonal explorations and Sligters dark crooning tendencies - and it doesnt sound like a stretch at all. A commission by Gaudeamus, Untitled #2 (The Mute) had its premiere on 8 November 2016 at the November Music festival in Den Bosch (NL). The quartet has toured with this piece in Norway (Stavanger and Bergen) and The Netherlands (Utrecht at Le Guess Who? festival and Amsterdam) and it was recorded at the famous Athletic Sound Studio in Halden, Norway. Vocalist and composer Jessica Sligter (Berlin) works in the experimental end of the pop-spectrum, and has three albums in her name so far. One of the most exciting young composers in the Netherlands today, Wilbert Bulsink (Amsterdam) has written for a range of established ensembles such as Nieuw Ensemble, ASKO|Schoenberg and Quatuor Diotima.For their second collaborative work, the composers asked Spellemanspriswinners Kari Ronnekleiv and Ole-Henrik Moe to join the ensemble. Moe and Ronnekleiv are active as improvisation duo The Sheriffs of Nothingness and worked together with the Norwegian band Motorpsycho. With liner notes by Salome Voegelin.