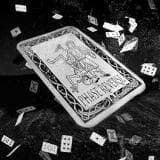 Hiding in Greece are newcomers PHASE REVERSE who play a very cool vibrant and edgy style of rock with a modern twist. "Phase Reverse? is a Power Rock Trio, just guitar, bass and drums; everything is stripped down to the basics... there is a certain purity and raw power that comes out of a trio that is very appealing to all the rockers worldwide, and that emerges from the classic band?s influences: Sabbath, Zeppelin, ZZ Top, AC/DC, Motorhead... Formed in Athens, Greece during the winter of 2007, the three of them meet at John?s recording studio, and they decide to join their forces. It was clear from the very beginning that there was chemistry between them, and everything seemed to be very promising. After lots of live performances they hit the studio and record 12 songs that signal the birth of "PHASE REVERSE"... the result is the debut album, with Blues, Rock' N' Roll, Hard Rock, and Heavy Metal all sonically mix while the American Southern Rock is set as a background

All My Rivals Are Imaginary Ghosts

Tales Between Reality And Madness