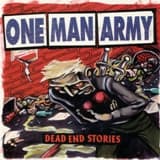 Re-issue on CLEAR vinyl. Debut Adeline release from One Man Army and the first Adeline release ever. Originally released in 1998 this was the first album in a long string of records from Bay Area locals, Jack Dalrymple (Swingin' Utters) and Brandon Pollack who would eventually form Dead To Me after One Man Army's break up. Featuring 12 tracks, this LP debuted the band's early street punk style but never failed to showcase the band's ability to craft a catchy tune that fit right in with the rest of the East Bay scene of the late 90s. For fans of: Dead To Me, Swingin' Utters, NOFX, Fat Wreck Chords, Green Day, Lookout Records! Operation Ivy

Don't Be A Dick