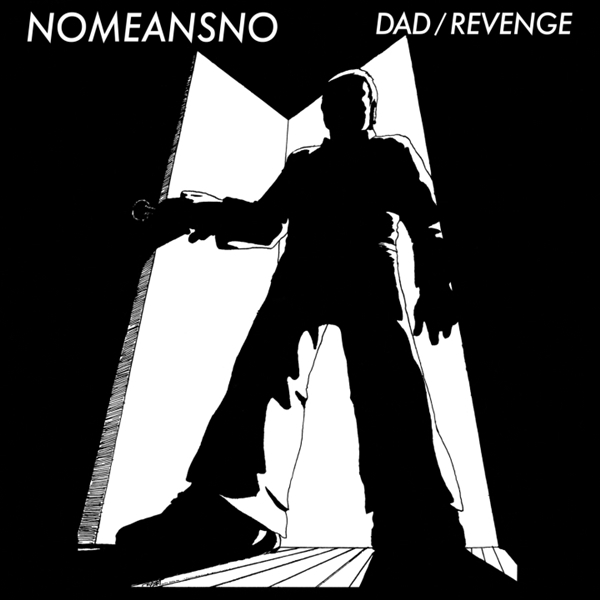 For over thirty years, Nomeansno defined post-modern hardcore. Acclaimed by peers and adored by fans, this musically adept trio consistently thrilled sweaty crowds around the world. They were nothing less than a punk rock success story, and always on their own terms. In a word (or several), they are were at the same time intelligent, articulate, studied, thoughtful, violent, passionate, intense, playful, and they became legends. Now at long last, after twenty-two years, Alternative Tentacles Records is proud to welcome them home, starting with the brand new reissue of the Dad/Revenge 7-inch. Originally forming in 1979 by brothers Rob and John Wright after being inspired by a D.O.A. show, and guitarist Andy Kerr joining the following year, Nomeansno would go on to release eleven albums, including a collaborative album with Jello Biafra, and numerous EPs and singles. Heavily influenced by jazz and progressive rock, they created a distinct hardcore punk sound, featuring complex instrumentation, and dark, "savagely intelligent" lyrics. They are often considered foundational in the punk-jazz and post-hardcore movements, and have been cited as a formative influence on math-rock and emo. In 1985 Nomeansno entered Keye Studios to record "Sex Mad" for release on Psyche Industry Records. In 1986, the album was picked up by Alternative Tentacles Records and reissued in the United States and Europe. In order to promote that release, Alternative Tentacles released the Dad/Revenge 7-inch vinyl single in 1987. Pulling together two stand-out tracks for the release, a powerful straight up punk track "Dad", with the anthemic rock feel of "Revenge", it was an unforgettable release to herald the coming full length. Now for the first time in thirty-six years, Alternative Tentacles Records and Nomeansno are giving fans an opportunity to own the long out of print 7-inch as the first step in reissuing the Nomeansno catalog back on Alternative Tentacles Records. This is a perfect release to be reintroduced to the musical brilliance of the band, and to understand why their music is every bit as vital and fantastic as it was when the Dad/Revenge 7-inch was first released in 1987.