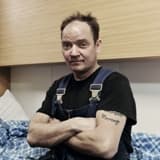 JOWJO is a nick name with a strange sound. Behind the name there is Sergio Carlini, guitar player from the italian punk band Three Second Kiss. Behind Sergio there is a solo project: a full-lenght (Out of the Window into the House - out in Nov. 2011 for the italian label Riff rec.) of electro-acoustic pieces, somewhere between primitive-folk, fingerpicking, chamber music, soundtracks of imaginary landscapes movies. Behind this solo project there are also friends that gave the right shape to the songs. Especially the brilliant Giovanni Fiderio, volinist, viola player and organist from the italian bands Tapso II and Mashrooms, and the special syncopated beat of Julien Fernandez. Behind the Jowjo album, there is this song "Ancora nessun messaggero", an extract of the album, a vortex of electricity and calm atmosphere, a song that Africantape and the three man decided to put out on a 7".