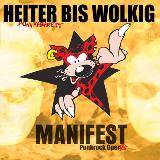 Since their start in the mid oft the 1980ies the german punkrock comedians Heiter bis Wolkig are performing their special music theatre work in the sense of fun guerilla activities. Their german spoken songs advanced to punk underground scene hits in Germany, Switzerland and Austria. But now the local party is over! From now on the hewns oft the bedrock of german cabaret punk are expanding into the english spoken zombielands and hit a massive hammer throw into the international arena of rock music with their brand new concept album called punk manifesto. The Cologne based punk protagonists deliver a powerful composed concept album - a magniloquent peace of art - music full of anger - audible in extasy - associative - fragmentary - deconstructed - without a classic plot - completely DIY- and they have still not arrived in the moloch of major mainstream music.

Chaos In The City