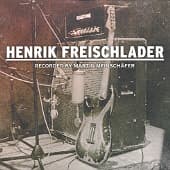 Within 3 years, Henrik Freischlader has celebrated 3 successful CD releases and over 500 concerts, which catapulted him to the top of the Blues scene. As some music critics prophesized at the beginning of his career, Henrik is now exactly where he always wanted to be.His Debut album "THE BLUES" set "the bar for all German Blues albums" (Home of Rock). With his sophomore album "GET CLOSER", he delivered "the milestone of German Bluesrock" (Home of Rock). The "LIVE album" which has 26 songs, was "simply terrific" (Rocktimes).and now this workaholic presents us with his fourth musical creation "HENRIK FREISCHLADER recorded by Martin Meinschaefer" on which he plays all Instruments himself. That, which in parts sounds like the first-takes from a fantastically well-rehearsed Band, is based on an ingenious homogeneity of the individual instruments. Musically, blues provides the fundament, on which Freischlader then built 13 of his own Compositions with influences from Rock, Soul, Funk, Jazz, Country & Pop. The bass, drums and organ create a sweeping Groove-carpet for the guitar solos, the voice varies closely around the first-class texts. What an Allrounder.

House In The Woods

Live At Spirit Of 66