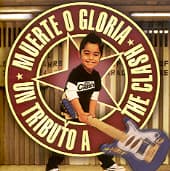 This record is the culmination a restless work respectfully done by a bunch of stubborn people determined on carrying out with a lot of effort a well deserved tribute to one of the most influential bands on rocknroll. An influence that was/is very much tasted in the Basque Country. Of course we are talking about The Clash. At that time the members of the bands that are now paying a tribute to The Clash in this album were mere kids, some of them were not even born. But all of them have grown up with their music which has always been a meeting point to give free rein to their trials with a guitar. And that heterogeneous public admiration is what the listener is going to find in this album. Such a diversity of bands like Vomito, Travelling Brothers, Ya te digo, Akatz or Los del Puente Romano to name a few cannot be wrong. This tribute album embodies the same nature than "London Calling" owned. You can find some straight punk-rock by Mentes Enfermas and Mundo Matadero, some reggae by Akatz, garage-punk by Paniks, some southern rock guided by El Jjinete Elctrico, a blues approach by Travelling Brothers and a lot of rocknroll with punk attitude. tracklisting; 1.Mundo Matadero-career oportunies 2.Macarrada-bilbo llama 3.Mentes Enfermas-white riot 4.Habeas Corpus-tommy gun 5.Safety Pins-train in vain 6.Bugatti-odioso 7.Anarco con Fermin Muguruza-muerte o gloria 8.Obligaciones-rock the kasbah 9.Ya te digo-revolution rock 10.Vomito-flamante y nuevo cadillac 11.Golpe de Estado-the card cheat 12.Josu Distorsion y los del Puente Romano-english civil war 13.Traveling Brothers-wrong em bollo 14.El jinete Electrico-somebody got murdered 15.Obsesion Fatal-police on my back 16.Akatz-un hombre blanco en san francisco 17.Paniks-know your rights