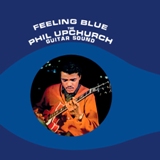 PRODUCED BY ORRIN KEEPNEWS Let me make it clear at the start that to me a microphone seems a much better means of com- munication than pen and paper (unless Im writing a letter home). Bur Im willing to try some writing at this time to inform you about and tout you onto a most groovy musician- guitarist Philip Upchurch of Chicago. The guitar outsells all other musical instruments today-which means youre all wuite familiar with it, and also means there are a great many guitarists around, of all kinds and shapes and sizes. So it takes a lot to make anyone stand out from the crowd. Above all, it takes the right soul, mind, and pair of hands. Upchurch has all those things, and he proves it every time he plays. Even though this is Phils first album on his own, you might say he has been preparing for it most of his life. He was born in Chicago in July of 1941 and grew up on the West Side. Id say that his father, an ex-pianist, became young Phils first musical influence when he bought the ten-year-old boya ukelele and taught him to play it. Later the father asked if he would be interested in guitar. Phil recalls that he wasnt sure his small hands could handle the instrument. But he accepted the challenge, and I for one am glad he did. Phils versatile background ranges from rock to church to jazz. Right after high school graduation he began traveling with such groups as the Dells, the Spaniels, Jerry Butler, and Dee Clark. He was soon in demand for recording-studio work on both guitar and electric bass. Arranger-composer Richard Evans was among those who recognised his abilities (as Richard puts it: "Phil colors beautifully"), and that led to record dates with Ramsey Lewis, Groove Holmes, Stan Getz, and even Al Hirt. Orrin Keepnews had first become aware of Upchurch in 1962, when Phil played electric bass on a Staple Singers album. (Since that time he has made almost all the Staples recordings and has appeared with the group as often as possible.) When Milestone was getting under way, "Pops" Staples mentioned to Orrin that Upchurch was eager to record as a jazz guitarist. Keepnews knew about the mans conception and soul-those are prerequisites for playing with the Staples-and after some conversation and listening to tapes of some original tunes decided it was time to expose this talent to the record-buying public. Phil is heard in two different settings: with horn backing, and with rhythm-section-only support. The band selections were arranged by Ed Bland, who has written for artists like George Benson, Lionel Hampton, and Harold Vick, and would seem to have a particularly good feeling for bluesy material. Upchurch plays that kind of guitar. Consequently: a swinging, "bluesical" merger. The other numbers (with Wynton Kelly on piano sharing some of the spotlight) have a cohesive, close-knit sound, and maintain the overall mood of the album. That mood is established right in the opening track, an Upchurch composition that convinced me our artist is really happiest when hes "Feeling Blue." Anyway, the tune has a happy kind of blues feeling you have to react to. To put it bluntly: this one- should be a hit! Its hard to pick favourites among all the goodies here, but I have to point to a few. Like the refreshing taste of "Tangerine" that closes Side 1. Its a bit of a departure from the blues mood of the album, but youll find yourself thoroughly enjoying Phils enthusiastic drive. (I wanted about three more minutes of this one.) Of the new tunes of today, Phil is most impressed with "Up, Up and Away," and Im very glad to hear a really good instrumental version of it. And then theres a not-new tune: if you recall "Israel" from the Miles Davis-Gerry Mulligan Birth of the Cool session, youll particularly appreciate the way Upchurch adapted it to his own quietly swinging style. I dont know why our man of the moment came up with a title like "Sebaceous Lament." Bur who cares when it shows off my favorite Upchurch groove-free, loose, and uncluttered! Finally theres the only standard-ballad on the album, an old Jimmy Rushing number called "I Want a Little Girl," which Phil glides through as effortlessly as if he were singing to himself the lyric: "1 want a little girl, to love a lot. . ." One thing more: Philip Upchurch is one of those naturals who dont read music. But it so happens that he writes and he feels and he plays-and HE PLAYS-and thats enough! YVONNE DANIELS "Daniels Den" WSDM-FM (Chicago)

It's A Man's Man's World

The Rise And Fall Of The Third Stream