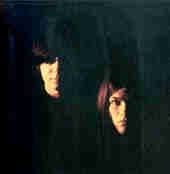 The Telescopes were among the most innovative and challenging yet successful artists in Creation Records' "middle period", a leading part of the wave of sonic experimenters who included Spacemen 3, My Bloody Valentine, Spectrum and Spiritualized. Towards the end of their time with Creation, they made their most fully realized album yet, "#", which for reasons too obscure to go into here, was barely released, and barely promoted. A bit of a tragedy really, it's hard to believe listening to this album that it is not an acknowledged classic yet. "The songs are built on acoustic guitars, then the tricked-out electric guitars are laid on top and garnished with bongos, organs, pianos, and all sorts of classic instruments. Stephen Lawrie's vocals are restrained and semi-emotional and female backing vocals add a touch of sweetness that might otherwise be missing from the record, as the overall atmosphere is very moody and introspective. with 4 bonus tracks :

Through The Mysts Of Time