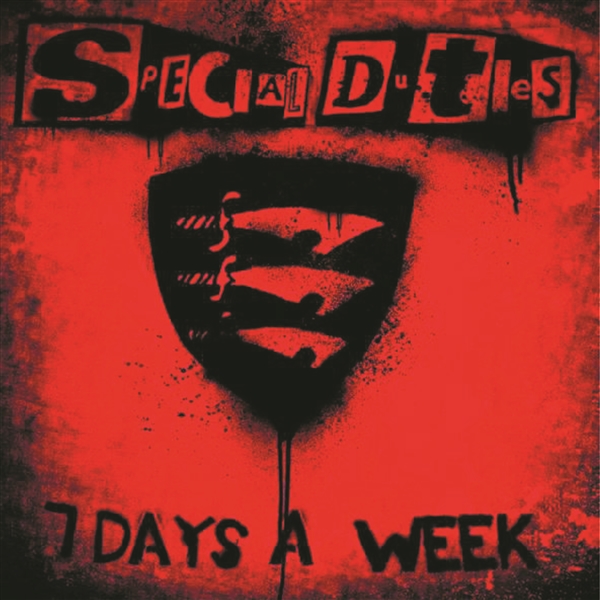 Classic UK82 heroes, Special Duties return in 2021. The band started in Colchester, Essex, UK as teen punks with a purpose in 1977. Regardless of their musical inabilities, they were signed in 1980. Charnel House released their debut single, the classic, Violent Society ("Violent Society" b/w "Colchester Council"). After years of practice and two more EPs (Police State and Bullshit Crass both on Rondelet), Special Duties, now with Rondelet Music (Anti-Pasti, Riot Squad, The Fits, The Membranes, The Treats), made a rebellious record with a statement, '77 in '82. As many 'punk' bands (Special Duties' influences The Adverts, The Boys included) were going arty or commercial or defunct, The Class of 1982 was redefining punk; harsher and angrier, eschewing the power-pop which had gripped early bands. Peers - such as Discharge, Abrasive Wheels, Chaos UK, GBH, Exploited, Varukers - embraced speedy riffs and snarls instead of hooks and skinny ties. The late 90's saw a rebirth of Special Duties. With reissues of their debut LP, '77 in ''82 on Captain Oi! and Distorted Truth on Get Back, they band began to leave a stamp in a new generation of punks' consciousness, Special Duties were requested to play UK punk festivals, most notably, Fuck Reading and Holidays in the Sun. This led to '77 in '97 also on Captain Oi! (run by Mark Brennan of The Business, who influenced the band as well). This resurgence also saw the band come stateside to the legendary CBGB's in 1998. A recording was self-released. Another single, "Wembley Wembley!" and a split EP with namesake, Violent Society from Philly. A third rising came in quarantine of 2020. Those recordings now see daylight on this fantastic record, Seven Days a Week Violated Records, also home of original legends and contemporary killers such as The Outcasts, The Violators, Foreign Legion, Vice Squad, The Parasitix, Menace, Red Alert, Eater and more, is now releasing Special Duties.

Dive In The Box