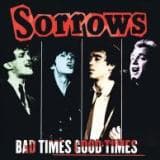 "Bad Times Good Times" marks the first time ever SORROWS music appears on CD as well as a LIMITED EDITION VINYL. Filled with never released recordings of their power pop gems, demos and live performances, the album is a feast for post-punk new vave fans and collectors who have been asking for years to be able to get their hands on SORROWS music. Formed in 1977 in NYC by Arthur Alexander (ex-Poppees), Joey Cola, Ricky Street and Jett Harris (ex-Poppees), SORROWS were all about the songs. Their tunes are filled with strong melodies, irresistible hooks and creative harmonies supported by their powerful backbeat and hard driving guitars. SORROWS two critically acclaimed albums and several singles on CBS Pavillion have become highly praised and are sought after collector items.

Through The Mysts Of Time