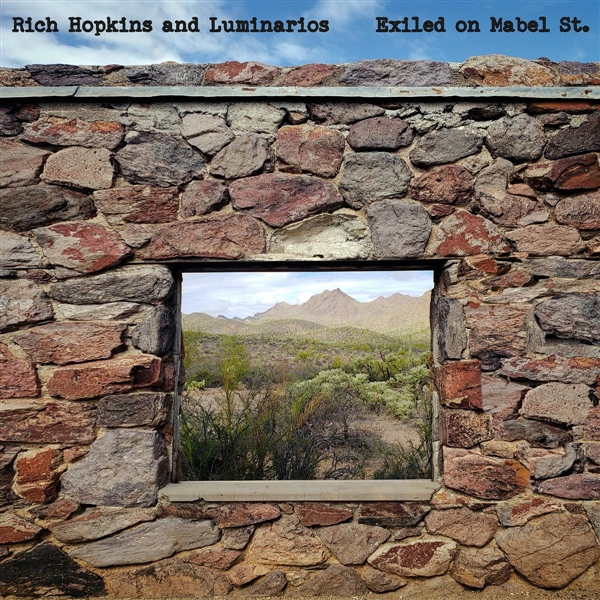 For three decades now, the name Rich Hopkins has stood for this dusty, guitar-soaked desert rock as it is played only in the southwest of the USA. After all the sufficiently documented activities as boss of the Sidewinders, Sand Rubies, Underbelly and many other projects, the Luminarios remain his central theme, admittedly with himself and his wife Lisa Novak as the only constant (all 10 songs were composed by the two). Since 1992 this formation exists sometimes as a trio, quartet, quintet or simply as a loose bunch of musician friends from the scene of Tucson, Arizona and Austin, Texas. In the beginning Hopkins walked dangerously in the footsteps of Neil Young & Crazy Horse. Later he swept out more the mature songwriter, even released some exciting concept works, varied moods and styles. The latest studio album Exiled On Mabel St fully joins the apparently endless series of first-class releases under the brand Rich Hopkins & Luminarios in terms of form, content and quality. The desert lives and Desert Rock will exist as long as Rich Hopkins can hold his guitars! Electric guitars mind you! On the 10 new numbers (plus 4 hidden additional songs as well as 2 commentaries on the album on the CD) they once again determine this distinctive mixture of epic rock anthems, sandy folk rock, proven rock "n roll values from the 60s/70s, some jingle-jangle guitar pop and a good dose of psychedelia.

Steady As We Go

Steady As We Go

The Neighborhood Is Changing

All Hat - No Cattle