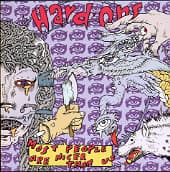 Most People Are Nicer Than Us

Once described as "Motorhead meets the Beach Boys" legendary australian punkers, the Hard-Ons have carved a notch into the world of punk rock and have assembled a worldwide cult following. They are also said to be australia's most succesful independent band ever, with 250.000 records sold worldwide and 17 consecutive number one hits on the australian alternative charts. Now, the Hard-ons unleash "most people are nicer than us" on the world - which is more Motorhead than the Beach Boys, showcasing the Hard-Ons at their noisiest best!

Most People Are A Waste Of Time

Love Is A Battlefield Of Wounded Hearts

Have You Seen Lucky?

Mad At The Sun