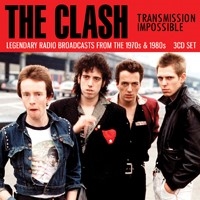 Not for sale to GAS (Germany, Austria, Switzerland SUPERB TRIPLE DISC SET OF CLASH BROADCAST RECORDINGS Formed in London in 1976, The Clash were key players in the original British punk rock movement. Billed as "The Only Band That Matters", they also contributed to the post-punk and new wave movements that emerged in the wake of punk and they employed elements of a variety of genres including reggae, dub, funk, ska, and rockabilly. For most of their recording career, the Clash consisted of lead vocalist and rhythm guitarist Joe Strummer, lead guitarist and vocalist Mick Jones, bassist Paul Simonon, and drummer Nicky "Topper" Headon. In January 2003, shortly after the untimely and tragic death of Joe Strummer, the band - including original drummer Terry Chimes - were inducted into the Rock and Roll Hall of Fame. In 2004, Rolling Stone ranked the Clash number 28 on its list of the "100 Greatest Artists of All Time". This triple CD set serves to both celebrate and document the Clash and their extraordinary music, by presenting three live shows the band performed throughout their time together, all of which were record for live FM Broadcast at the time. DISC ONE here features their 1978 London gig, played at the Lyceum Ballroom on 28th December, a month or so after the release of the groups sophomore album, Give Em Enough Rope. DISC TWO finds the Clash live in Amsterdam on 10th May 1981 at the citys Jaap Edenhal, six months after the release of the triple Sandinista! record. DISC THREE completes the set with their 1982 gig in Japan, recorded at the Nakano Sunplaza in Tokyo, on 1st February 1982.

The Process Of Elimination