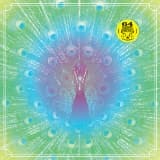 64 SLICES OF AMERICAN CHEESE were born in 2002 in Cesena, Italy. They are 6 musicians with the shared passion for movies' themes and 90's psychedelic post-noise. Their main goal is the research of moods that music can evoke. 8 years after their previous album and 4 years after beginning of recording sessions, they present this new album "Il Pavone Reale", released by Go Down Records. The band has introduced the Calexico's style in Italy, but in the last years they have turned into jazz and prog sounds. Recently a very famous American director has naively admitted "...if I had known the Sixtyfour before, I wouldn't have been working with Morricone for my latest movie's soundtrack..." (it's a joke, Quentin!). All new tracks have been written and arranged in a mathematical and obsessive way and many composing choices are clearly open-minded. "Il Pavone Reale" (translated "The Royal Peacock") contains many touches, some are rocking while others are spanking the listener's eardrums. The 9 tracks have been recorded and mixed by the band bassist and leader Andrea Zanella, with Alfredo "Epi" Gentili, at Bluscuro Recording Studio and Go Down Studio, Italy. Sound experiments, vintage equipment, toys and very famous producers' rules made this unique sound possible.

Fill You Up With Fie Star Gasoline