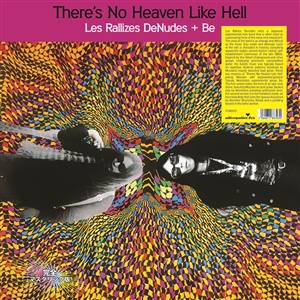 One of the strangest and most enigmatic groups in the history of rock n roll, Les Rallizes Denudes, also known as Hadaka no Rallizes or Hadaka no Rarizu , were a Japanese experimental rock band that is often cited as a pioneering force of the noise rock movement. The story of the band is as strange and difficult as the music they made and although much of the tale is shrouded in mystery, everything apparently begins around Kyotos radical anti-establishment communes of the late 1960s, where androgynous frontman Takashi Mizutani formed the group in November 1967 while attending Kyoto University. Hard facts are in thin supply and the bands name employs complex punning that essentially equates to Fucked Up and Naked in Japanese, a slang reference to being high on drugs. Inspired by the Velvet Underground and other groups employing prominent, overamplified guitar, the bands music was typically based on repetitive rhythmic patterns bolstered by Mizutanis heavily distorted lead guitar, though the poor sound quality of early demos apparently turned Mizutani away from studio recordings, rendering much of their output in the form of live bootlegs, supplanted by the occasional leaked studio demo. Early performances were given as accompaniment to avant-garde theatre groups, though the group was soon deemed too loud to be a mere accompaniment, and membership fluctuated frequently, with Mizutani being the only constant, though he retreated from public view following the 1970 Red Army hijacking of Japan Airlines flight 351, with the assistance of original Rallizes bass player, Moriaki Wakabayashi, who subsequently fled to North Korea; the band continued to sporadically record and perform under various guises until 1997. The two versions of "Theres No Heaven Like Hell" presented here were recorded on 1 April 1975 at Rallizes House in Fussa, a small town to the west of Tokyo, joining Mizutani with keyboardist/guitarist Taisuke Morishitas experimental group Be, originally known as Yellow. The first version takes the form of an epic slow drone, featuring Mizutani on acid guitar, backed only by Morishitas pulsating synthesizer lines; the second version is in full marathon mode, an hour-long dirge that sees the spacey duo joined by drummer Shunichiro Shoda and a plodding bassist in the latter portion.