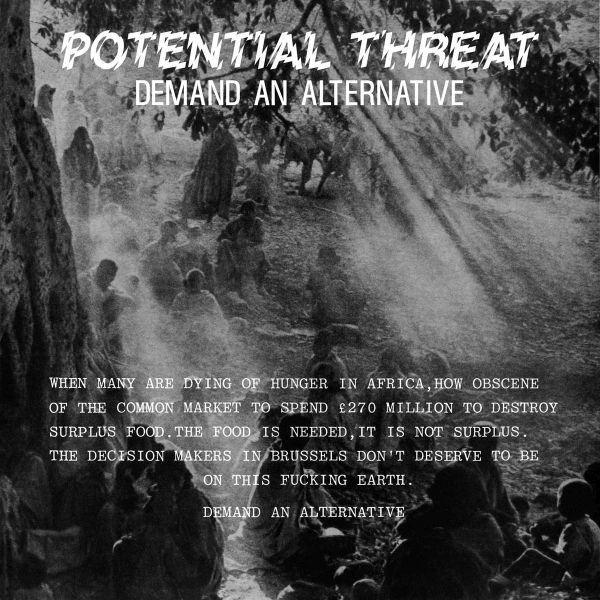 POTENTIAL THREAT were formed in Blackburn in 1981, and recorded a couple of 7" between 1982 and 1985. They played a lot of gigs with different bands as Discharge (their main influence in Paulines own words), Conflict, Crass and so on. The band started to be recognized by the punk fans specially in U.K. and got some great feedback as their gigs were totally wild and out of control. After different line-up changes, the band recorded this fucking ace LP in 1985 under the mighty Mortarhate label with a running of 1000 copies that were sold in few months. This is the first ever official re-issue from the album, with the same artwork and insert in a limited edition of 500 copies.

1. THE HUNT IS ON
2. NUCLEAR THREAT
3. VIOLENT UPRISING
4. FIGHT FOR LIFE
5. THE OTHER WAR
6. BEHIND CLOSED DOORS
7. DEMAND AN ALTERNATIVE
8. BLOODBATH
9. WHATS SO GREAT BRITAIN
10. MISERABLE BASTARDS
11. WAR WITHOUT A CAUSE
12. WESTMINSTER FASCISM
13. INSANITY