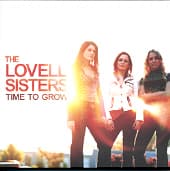 This is the well recieved second album from The Lovell Sisters. The Lovell Sisters, who have proven themselves time and again as polished performers, have been praised equally for both their virtuosic playing-Jessica on fiddle, Megan on dobro, Rebecca on guitar and mandolin-and their vibrant vocal harmonizing. They have played on the US festival and consert scene since putting out their first album "When forever rolls around".With Time To Grow, The Lovell Sisters are coming into their own. While their 2005 debut When Forever Rolls Around and 2007 CD/DVD Live At The Philadelphia Folk Festival showcased their dynamic musical interaction and interpretive gifts, The Lovell Sisters are emerging as songwriters. Time To Grow features five original songs, including two award-winners; the title track, "Time To Grow," is a finalist in the 2008 International Songwriting Competition, and "Distance," a Grand Prize Winner in the 2008 John Lennon Songwriting Contest. Although pre-production took place in The Lovell Sisters living room in Calhoun, GA, the album was recorded in Nashville, TN during the summer of 2008. It was co-produced by the sisters and engineer Brent Truitt, a seasoned mandolin player with credits including the Dixie Chicks, Dolly Parton, and Alison Krauss. The energy and spontaneity of American roots music that originally caught The Lovell Sisters attention continues to be an integral element of their live performances. Since 2004, they have toured throughout North America, and made three well-received European tours, with dates in Northern Ireland, Norway, Belgium, Germany, Denmark, Switzerland, Sweden and the Netherlands. With Time To Grow, The Lovell Sisters share their passion for music with their fans, with their colleagues, and especially with each other. The album has been really well recieved, amongs it currently being on it's third month on the European Americana radio Chart.

When Forever Rolls Around

Been A Long Time

Band For All Seasons

The Sound Of The Ocean Sound

The Sound Of The Ocean Sound

Faces/hills Of Tennessee And Beyon

Lost In Your Hometown

Live At The Linda

When Forever Rolls Around