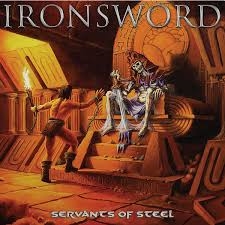 the Portuguese cult underground epic metal force, have finally revealed the first details about their upcoming album "Servants of Steel" to be released with Moonspell Fernando Ribeiro's powerhouse label Alma Mater Records on January 24th 2020. Recorded at the Pentagon Audio Manufacturers with Fernando Matias in Lisbon, Portugal, the band teamed up with legendary producer Harris Johns (Helloween, Voivod, Kreator, Sodom), mixing the Barbarians new magnum opus! The result is beyond spectacular and its Ironsword like you never heard it before, with the same barbaric drive but with a top-notch sound that will take their and Epic Metal fans by storm! Special guest: Bryan "Hellroadie" Patrick from the infamous Manilla Road. "Servants of Steel" will not only signal how alive the Portuguese metal scene is, but also deliver a blistering Heavy Metal record the world of steel will need to hear, four years after the band's much-acclaimed None but the Brave record. "This is definately the most challenging album ever written and stands out from all previous works." Guitarist and vocalist Tann comments. "Everything that is quintessentelly IRONSWORD is present here and out in full force." Label owner and Moonspell vocalist Ribeiro states:"Alma Mater is very proud of having IRONSWORD on their ranks! They are an amazing and sincere band which breathes Heavy Metal through all their pores. Their new album Servants of Steel will for sure take their fans by storm and its a sign of great times to come!"