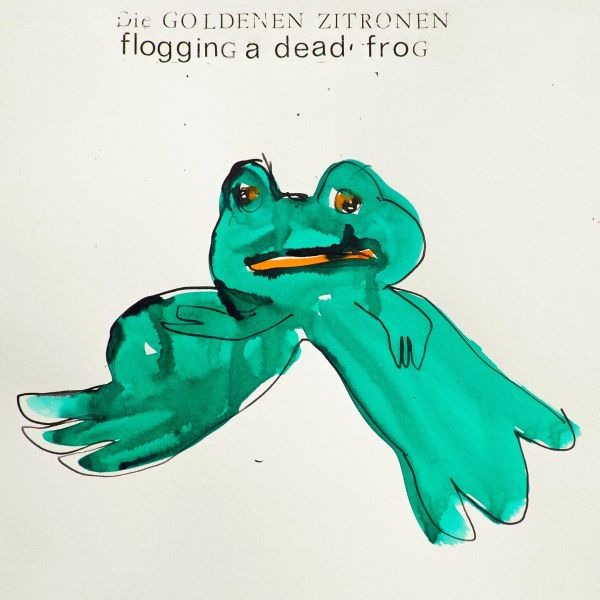 Die Goldenen Zitronen (The Golden Lemons), born a punk band in 1980s Hamburg and having developed into a seminal art punk collective, present their new album. After 11 long-players and countless collaborations with artists such as Peaches, Wesley Willis (with whom the band toured the US), Chicks On Speed, Franoise Cactus (of Stereo Total), Mark Stewart (of The Pop Group), DJ Koze or Michaela Melian, Flogging a Dead Frog is their first release on Altin Village & Mine. Flogging a Dead Frog assembles instrumental and, for the first time, English reworkings of songs of their most recent albums. Far from being a complacent Best of, the album directly plugs into the bands impressive body of work with the opener, >Fan Without Fan<, being a reworking of the most recent albums final track, >Wer Hier<. Flogging a Dead Frog, then, unfolds a re-contextualization in two senses: For one, its instrumental tracks emphasize the fact that the bands sound has always been much more than a musical accompaniment for the unrelenting social commentary of singer Schorsch Kamerun. Here, the album brings out the Goldies tremendous nomadism between punk, techno and krautrock, its dramaturgical condensations mirroring the diverse engagements of the six members in theater and film projects. On the other hand, in the English versions of songs such as >If I Were A Sneaker<, a song about European immigration policy, or >The Investor<, Flogging a Dead Frog proves a consequent re-adjustment of the bands political scope, opening discourse on matters that have desastrously proven to not be exclusively pertinent to Germany. As is typical for the Goldene Zitronen, these two interventions - one concerning the bands oeuvre, the other its environment - are inseparable and testament to their political aesthetics. A political aesthetics of which Flogging a Dead Frog is not a review, but a substantial extention.

1. FAN WITHOUT FAN
2. IF I WERE A SNEAKER
3. LA TOYA SPEECH
4. DER FLOETIST AN DEN TOREN DER DAEMMERUNG
5. CAUSE I'M FREEZING
6. THE INVESTOR
7. CRASHING STOCKMARKETS
8. THE MAYOR OF EMERALD CITY
9. BUSINESSPEOPLE 2.1
10. THIS I'M NOT TELLING YOU